This presentation will guide you through the basic foot screening and examination techniques you need to identify the “at risk” foot. 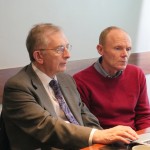 Pr. Mike Edmonds Professor Michael Edmonds is a Consultant Physician at King’s College Hospital in London with a special responsibility for care of the diabetic foot.  He developed a multi-disciplinary diabetic foot clinic in 1981, one of the first in the world.  This clinic brought about a 50% reduction in major amputations in people with diabetes at King’s College Hospital. He is a past Chairman of the Diabetic Foot Study Group of the European Association of the Study of Diabetes.  He has co-authored the book Managing the Diabetic Foot (Blackwell Science) and A Practical Manual of Diabetic Foot Care (Blackwell Science), which was voted BMA Book of the Year in 2004.  He won the Karel Bakker award at the 6th International Symposium on the Diabetic Foot in 2011 and more recently in 2013 the DFSG Achievement Award.  He has also won the Edward James Olmos award for the advocacy in amputation prevention at the DF Con 2014 and gave the Arnold Bloom lecture at Diabetes UK in 2015.   Pr. Neil Baker' biography Neil Baker is a Consultant podiatrist, who qualified in 1980 and has gained Fellowships from the College of Podiatry and Royal College of Physicians and Surgeons  (Glasgow). . He is a key opinion and policy leader within the UK and has been actively involved in diabetic foot management since 1982. He has published extensively in many key scientific journals and sits on several editorial boards, reviews papers and documents for N.I.C.E, Dept of Health, Cochrane Library and the College of Podiatry. He lectures at national and international meetings and teaches/examines on several post-graduate/MSc courses both nationally and overseas. He currently is employed at Ipswich Hospital NHS Trust as clinical lead for the Diabetic Foot service, which has one of the lowest reported amputation rates worldwide. Previously he led the diabetic foot service in Southampton and was a Clinical tutor/examiner in the School of Podiatry. He has been an active team member of the IDF’s “Step by Step” diabetic foot training programme since 2005 and one of the founders and teachers of “Train the Foot Trainer” programme. He has also trained diabetic foot teams in many countries worldwide. Amongst several awards he recently was presented the prestigious “Alf Morris” award at the House of Lords in recognition for his outstanding diabetic foot work within the UK and worldwide.
Lecture(s):
A basic foot examination